A DATED CHALET BUNGALOW GIVEN A NEW LEASE OF LIFE THROUGH IMPROVED LAYOUT, AMENITIES, INTERIOR DESIGN AND TECHNOLOGY.  THE REDEVELOPMENT INCLUDED A TWO STOREY REAR EXTENSION THAT DOUBLED THE PROPERTY’S SQUARE FOOTAGE.

KNOWING YOUR TARGET MARKET AND PLANNING FOR IT!

Prior to planning the re-development works the target buyer market has to be researched, the property is in a village within commuting distance to York and next to a primary school, the village had a mix of existing residents but mainly professional workers with children and retired couples or individuals.  The property was on a good sized plot and had the capacity to be extended into a good sized family home suitable for families or for retiring couples downsizing from larger properties either way our buyers would be looking for good quality, low maintenance accommodation with suitable amenities.

It is widely known that kitchens and bathrooms are the key rooms for most people and so a list of peoples ideals was researched and created and all of them were implemented into the design.  All of those boxes were ticked, and more!

Research found that some of the top items in a persons dream Kitchen are: an Island, breakfast bar, range cooker, American style fridge freezer, wine fridge, built-in dishwasher and microwave, granite work tops, 1 and ½ bowl sink, pull out pantry, stone work tops, pan drawers, soft closing doors and drawers (not something that springs to mind immediately but it is something that everyone wants when they use a kitchen that doesn’t have them, especially those with children).
We also threw in an added feature, the old cliche ‘wow’ factor, an instant boiling hot and cold water filter tap.

When it came to the design scheme a modern, crisp, neutral scheme with country features and finishes was chosen in order to appeal to a wide range of tastes.

Modern kitchen door and drawer fronts were chosen (target: city commuters) with more traditional looking handles (wanting the country life).  The ivory shaker is a design that is quite neutral and therefore appeals to the vast majority of tastes, it will also stand the test of time as it is not a ‘trend’ kitchen.

En-suite shower rooms are a must for modern executive type family housing and the design allowed for two, meaning there was a guest room or teenager room with private shower room in addition to the master bedroom suite.

As a freestanding bath and separate shower occur regularly at the top of wish lists and a four piece suite was feasible with the space available in the newly created bathroom, they were fitted, a roll top claw foot bath was chosen to match in with the country design scheme.

Solid oak flooring was fitted throughout the ground floor along with oak doors.  Double doors were fitted from the dining room into the newly built Lounge giving it a more formal entry.

A multi-fuel ‘Hunter’ stove was fitted and made a grand focal point with the symmetrical log stores and oak mantel (big tick for the wish list with this installation).  The Lounge was fitted with surround sound and the ceiling stepped down around the edges with recessed down lights installed as a feature and to break up the vast expanse of ceiling.  The ceiling lights and lamps around the room were operated on separate dimmer switches in order to give flexibility of varying mood lighting.

The original main entry was at the side of property and was too small for purpose, a new entrance hallway was created at the front of the house, the stairs were replaced with a turn in them which created a new room (and a new side entry) to provide that all important utility room.  The new front entrance was tiled with slate tiles to mirror the slate on the porch step.  A tall designer radiator fitted next to the front door gave viewers an immediate warmth as they stepped into the house and also set the standard for the house.
Dusk motion sensors were fitted in the hall and on the landing to operate the Low level wall lights.  A feature shelf was created in the stair well and fitted with sensor operated LED lights.

The first floor layout was drastically altered from two bedrooms to a master bedroom suite, two additional bedrooms and a family bathroom.  The new extension contained the master bedroom suite, one of the existing bedrooms was split and extra floor area found by pushing the wall further into the eves making enough space for a family bathroom. The new master bedroom incorporated a Juliet balcony making the most of the view over the garden, through the wooded cops and to the dear in the field beyond.
Bespoke ‘His’ and ‘Hers’ wardrobes were built with internal lighting operated by automatic door opening switches.

Electric under-floor heating was added under the tiles in the ground floor en-suite to take the nip off from the concrete floor below.

Externally the garden was mainly laid to lawn with large patio and decking areas.  Small planters were built along the drive with lights angled up the fence and the evergreen climbers (low maintenance and year round colour), the lights were motion sensor activated and with the sensors situated at the bottom of the drive).  The lighting in the patio planter, deck lights, flood lights and water feature were operated by hand held remote.

During the purchase the conveyancing team found that the previous owners had built a sun room on the back of the property without the necessary planning consents, retrospective planning consent could have been sort but as the intension was to demolish the sun room to make way for a much larger two story extension (subject to planning) the purchase went ahead without incurring a delay. 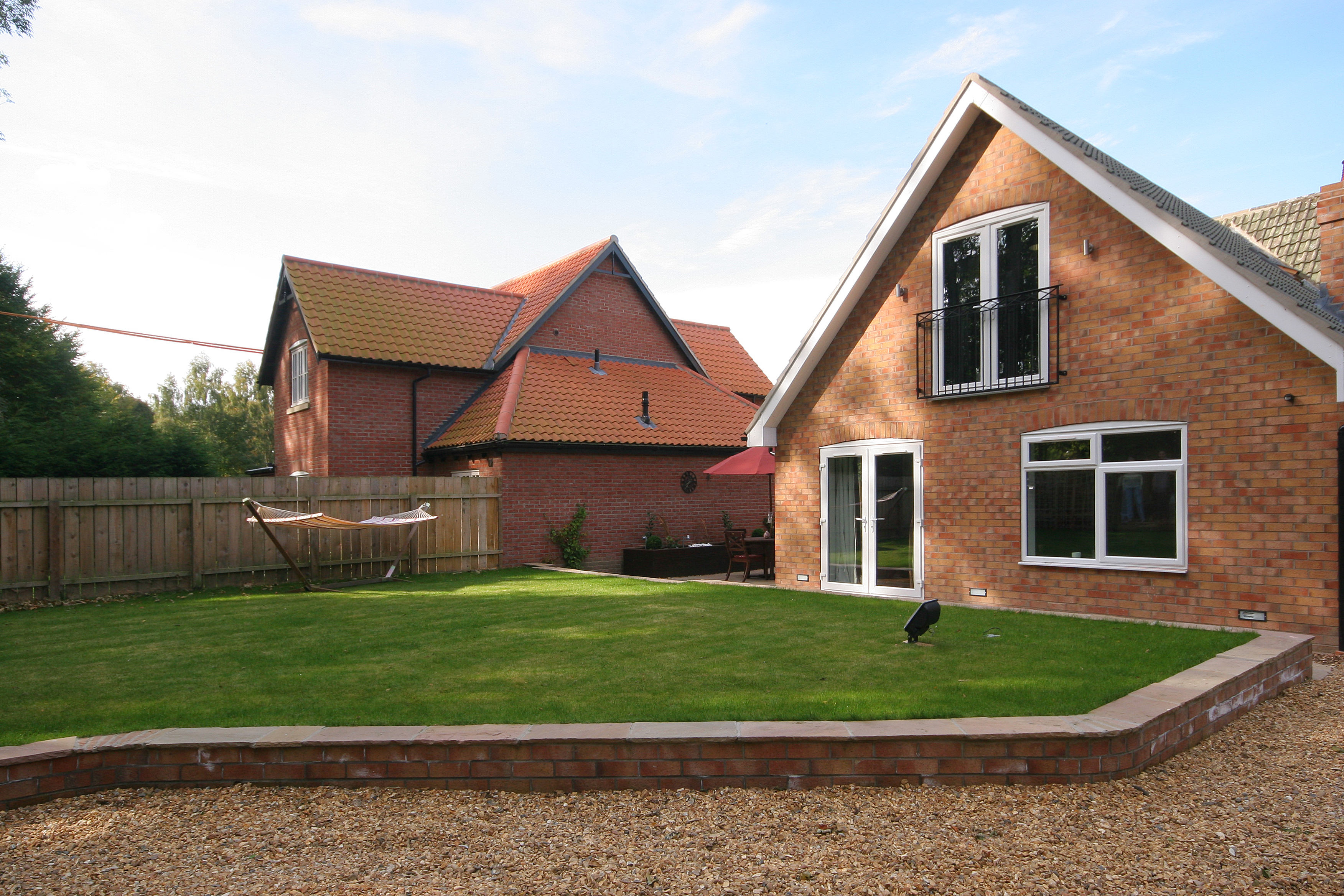 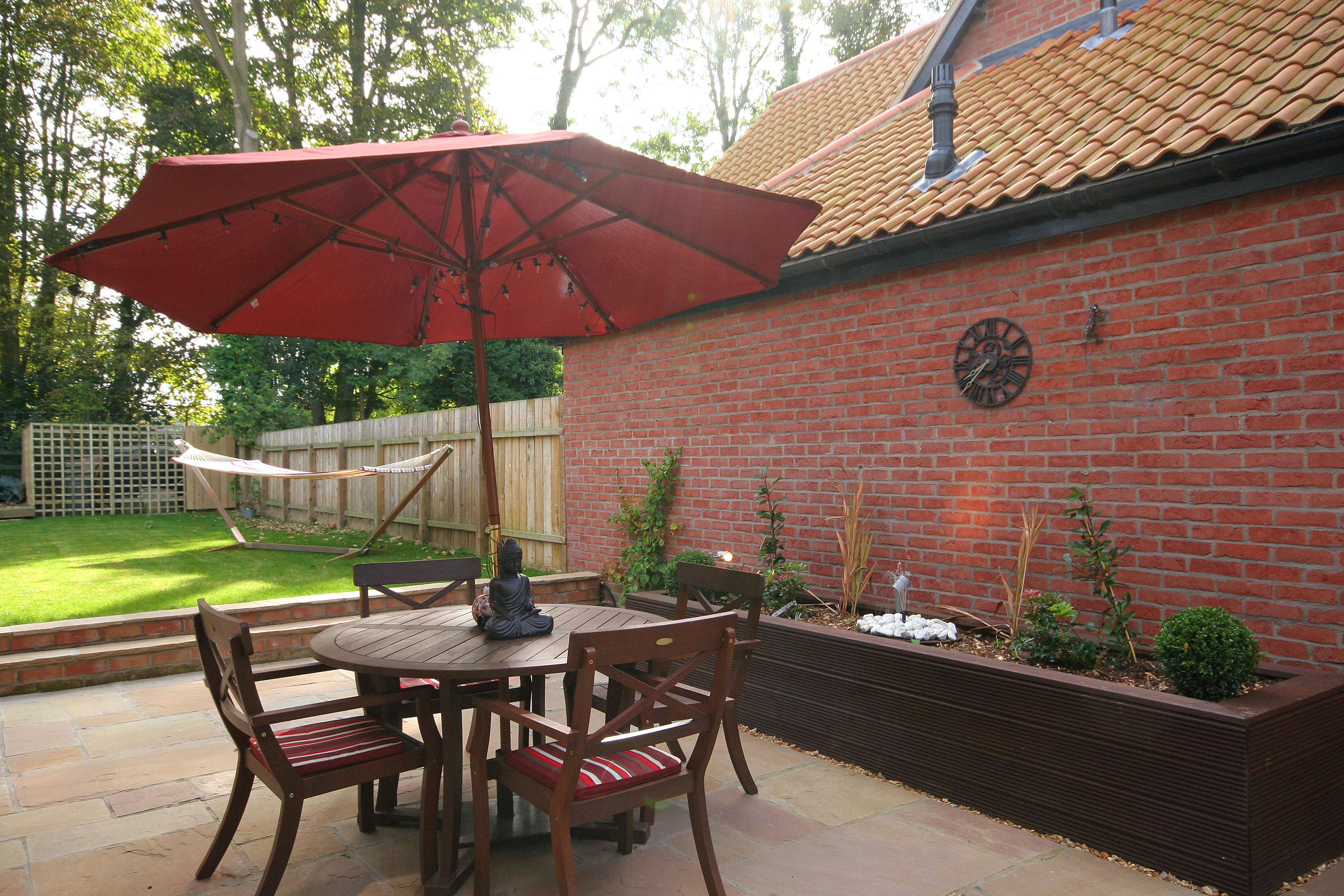 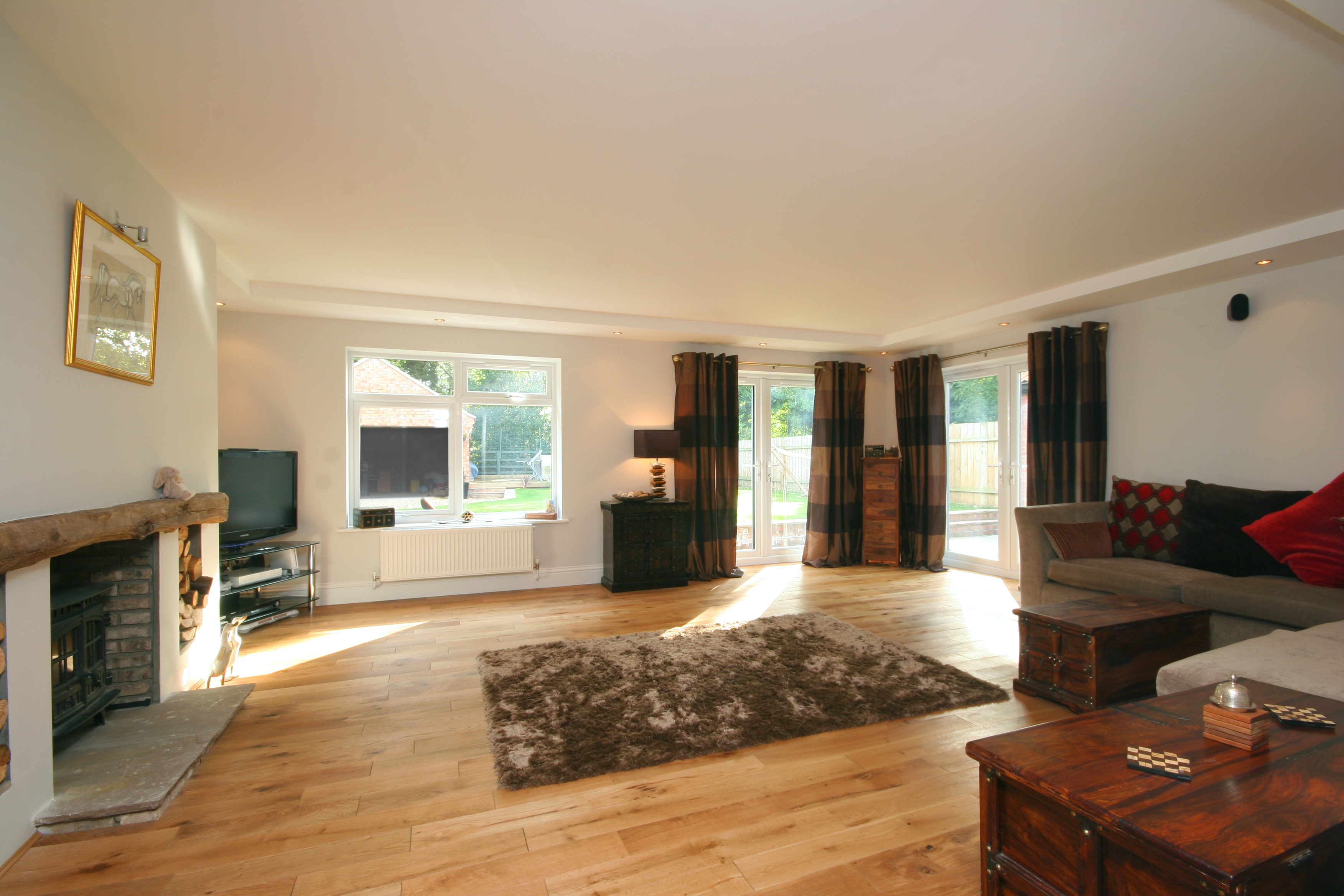 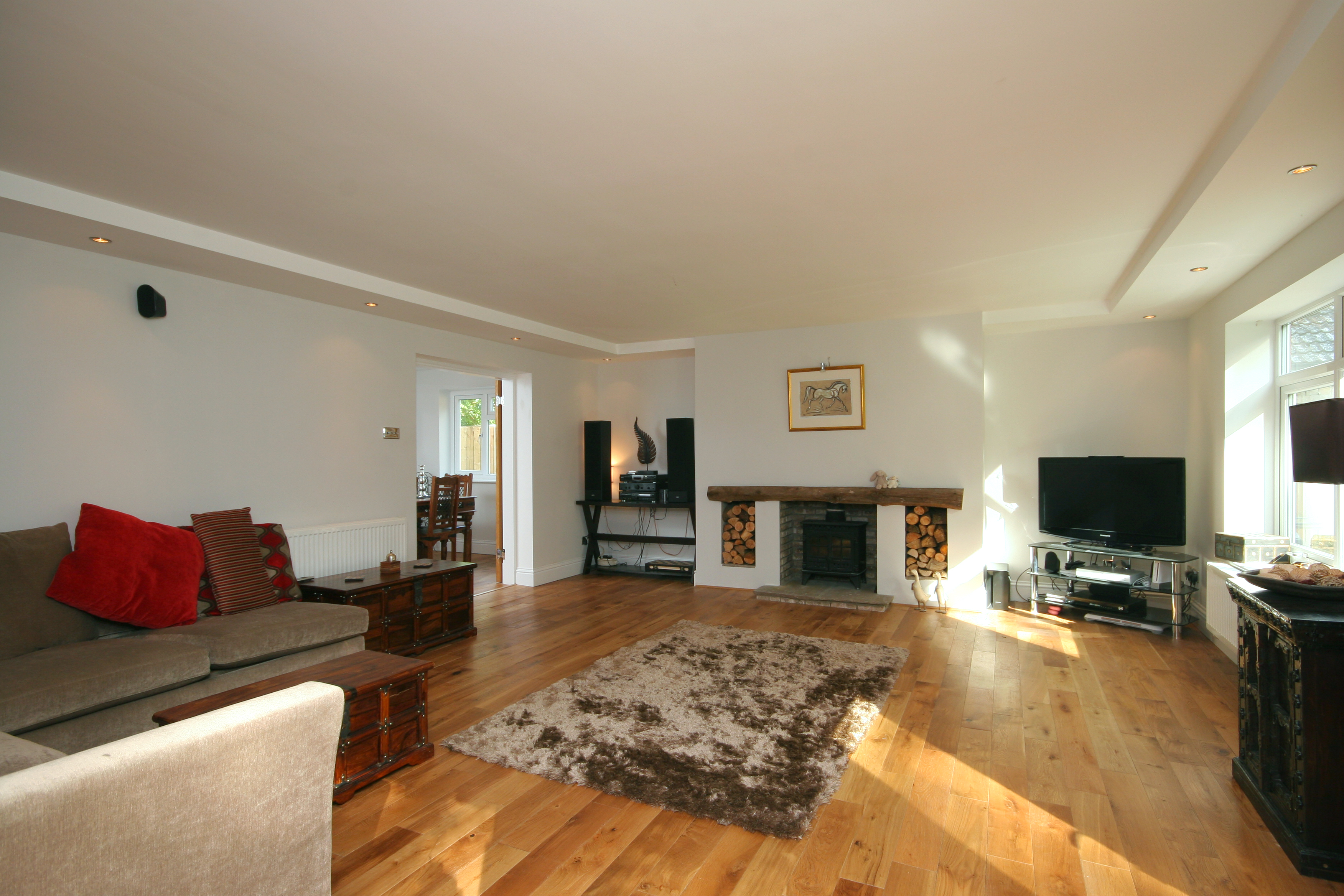 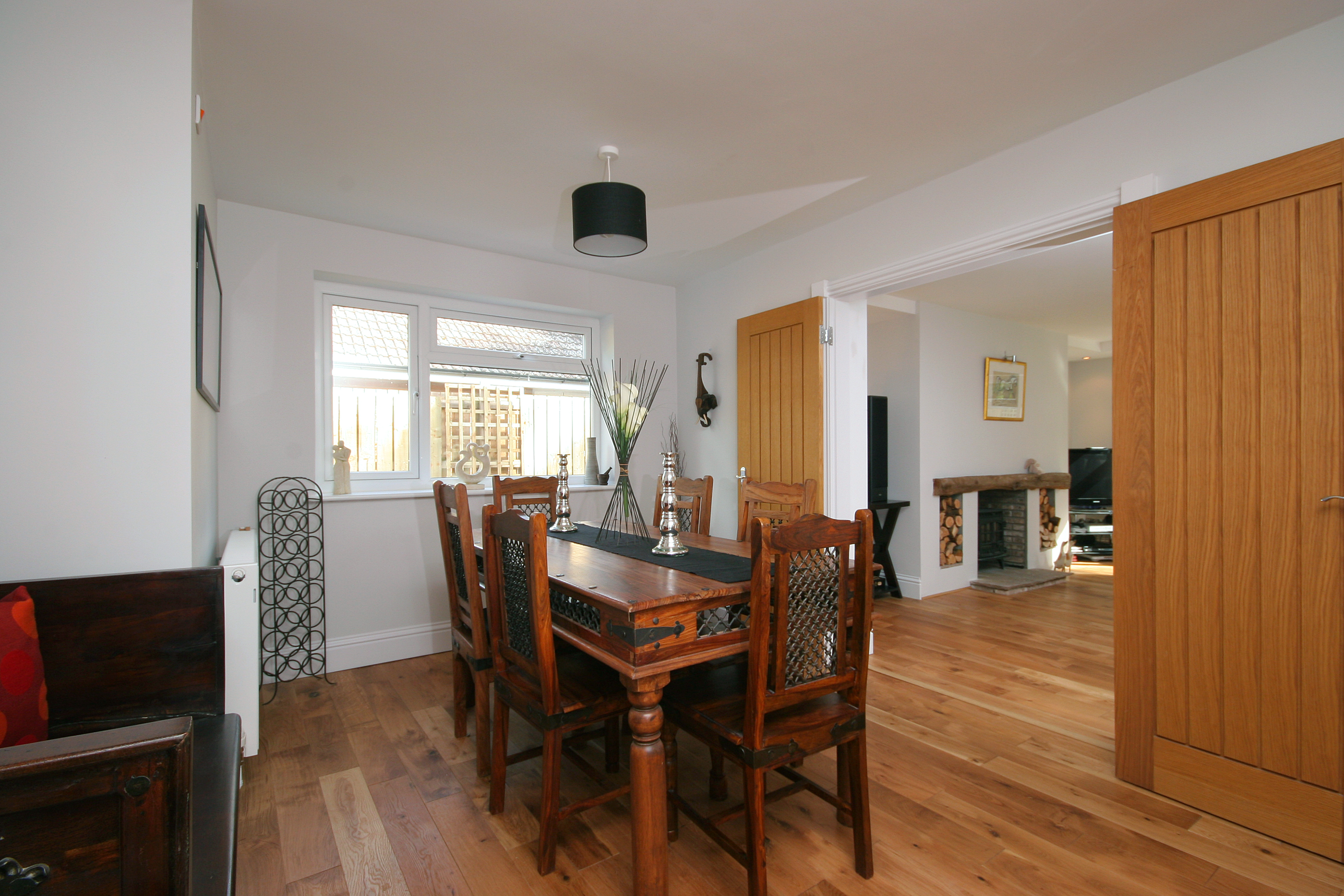 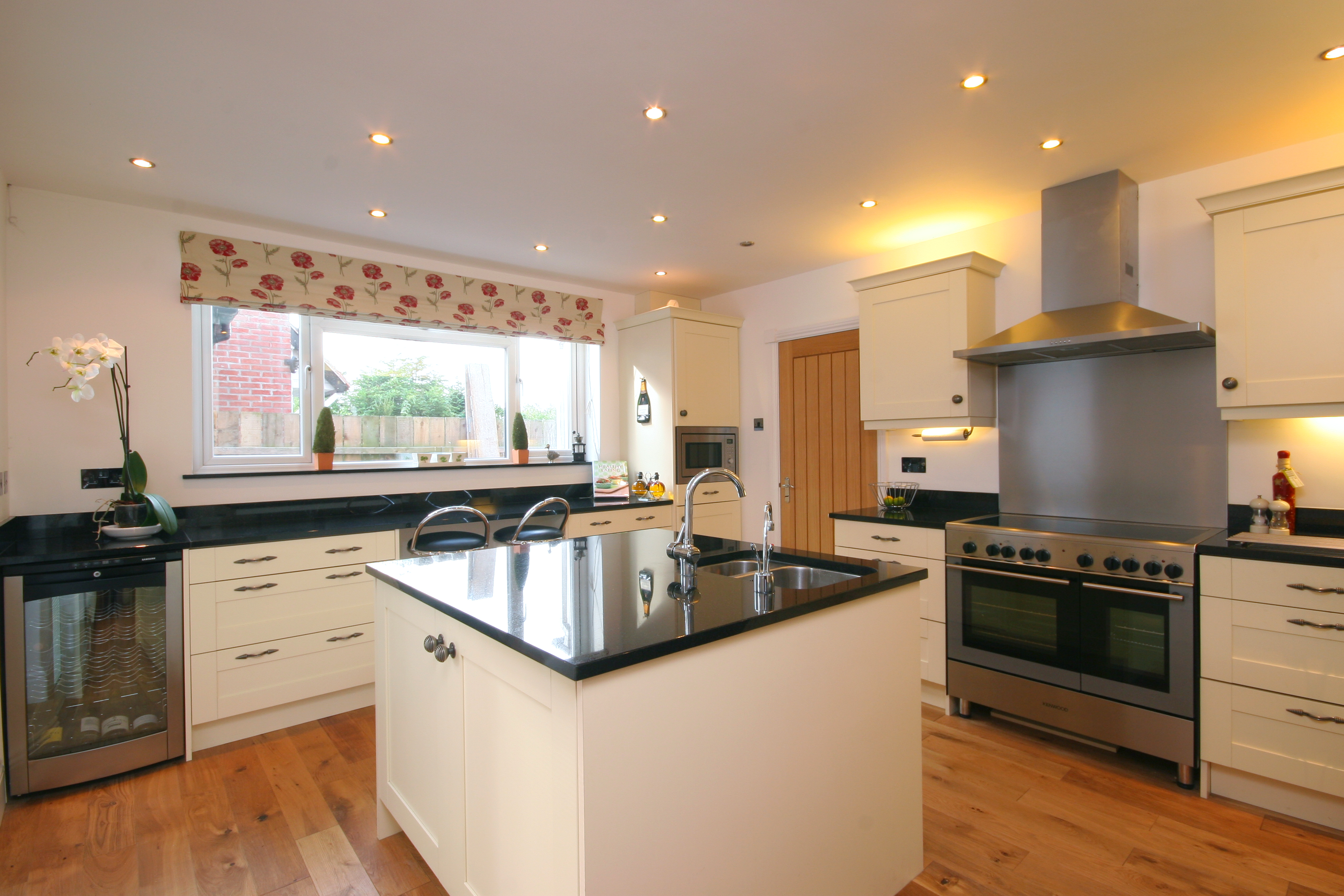 It’s important when designing a property not to miss the details, as they can set you apart in the market we spend a lot of time on the design of each room with the end user in mind.  It is important to ask what would I need, what would I want and what would be really amazing. 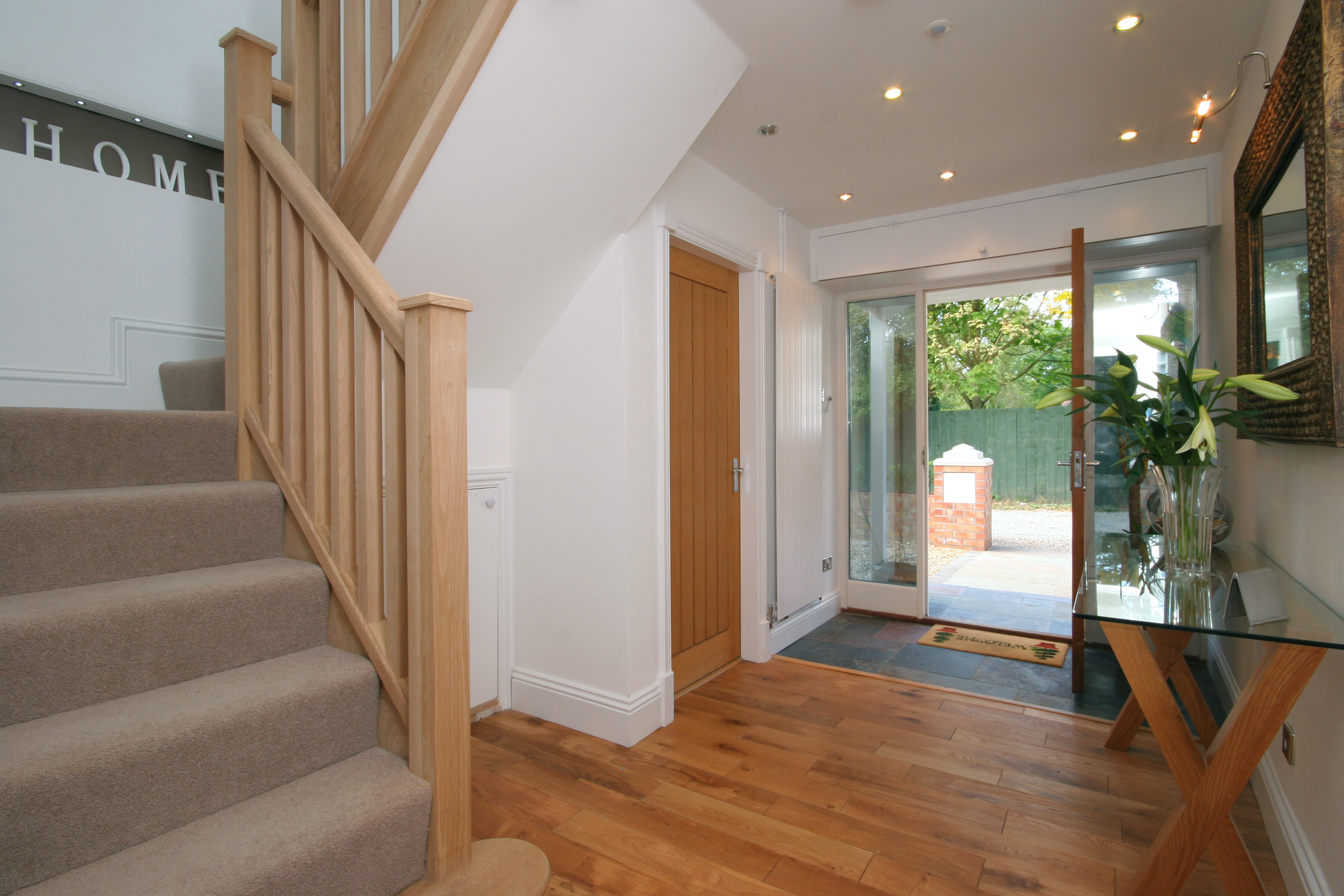 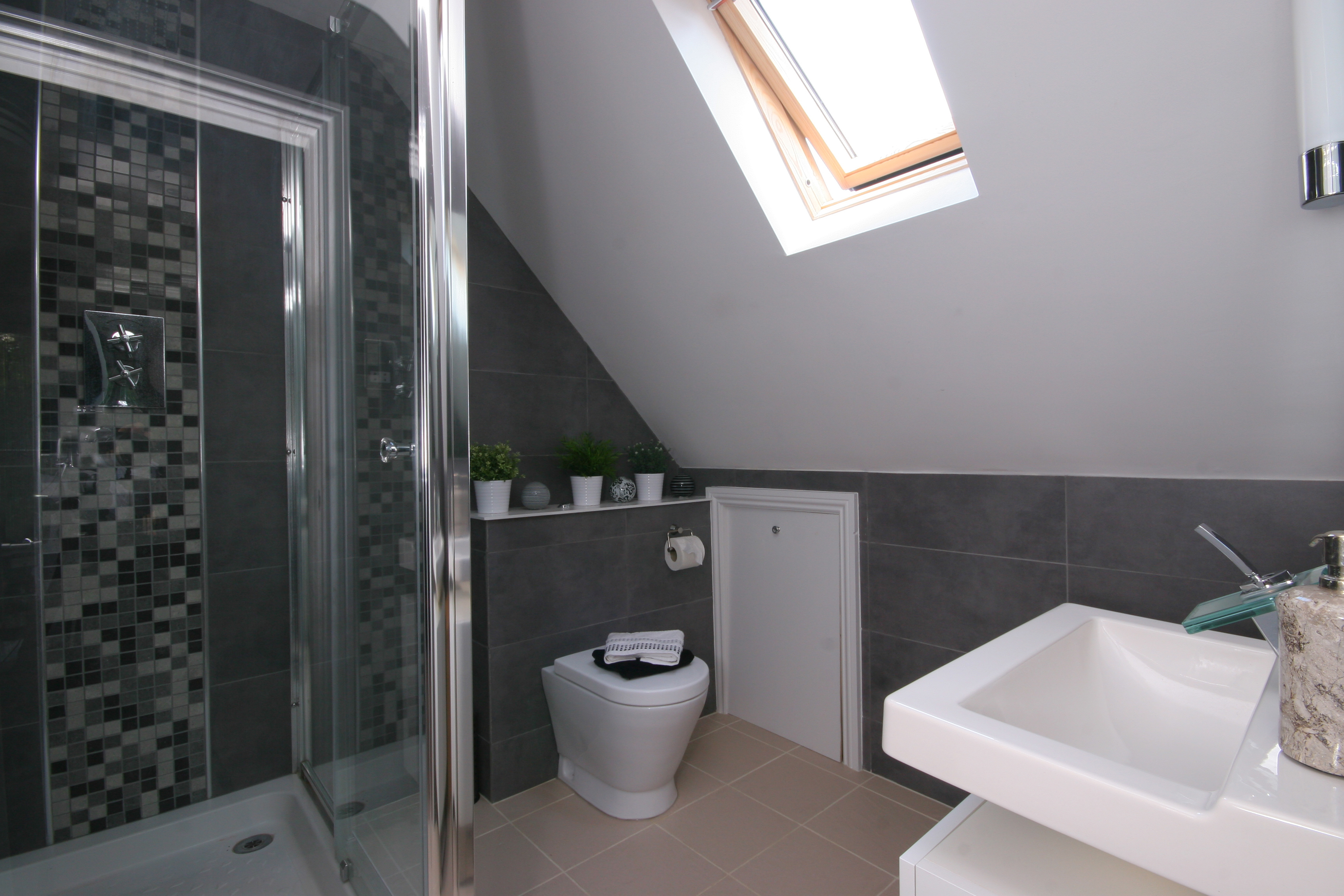 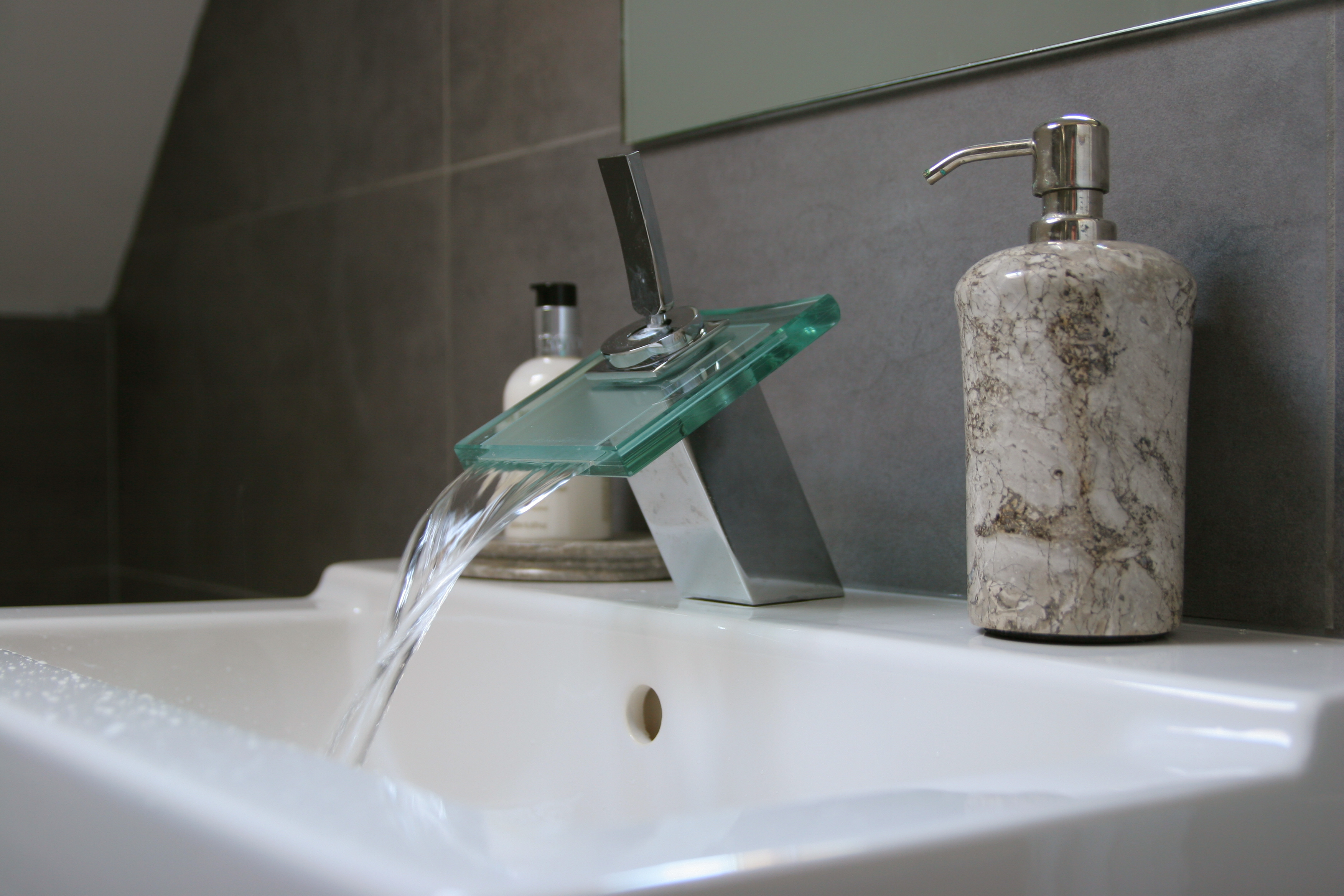 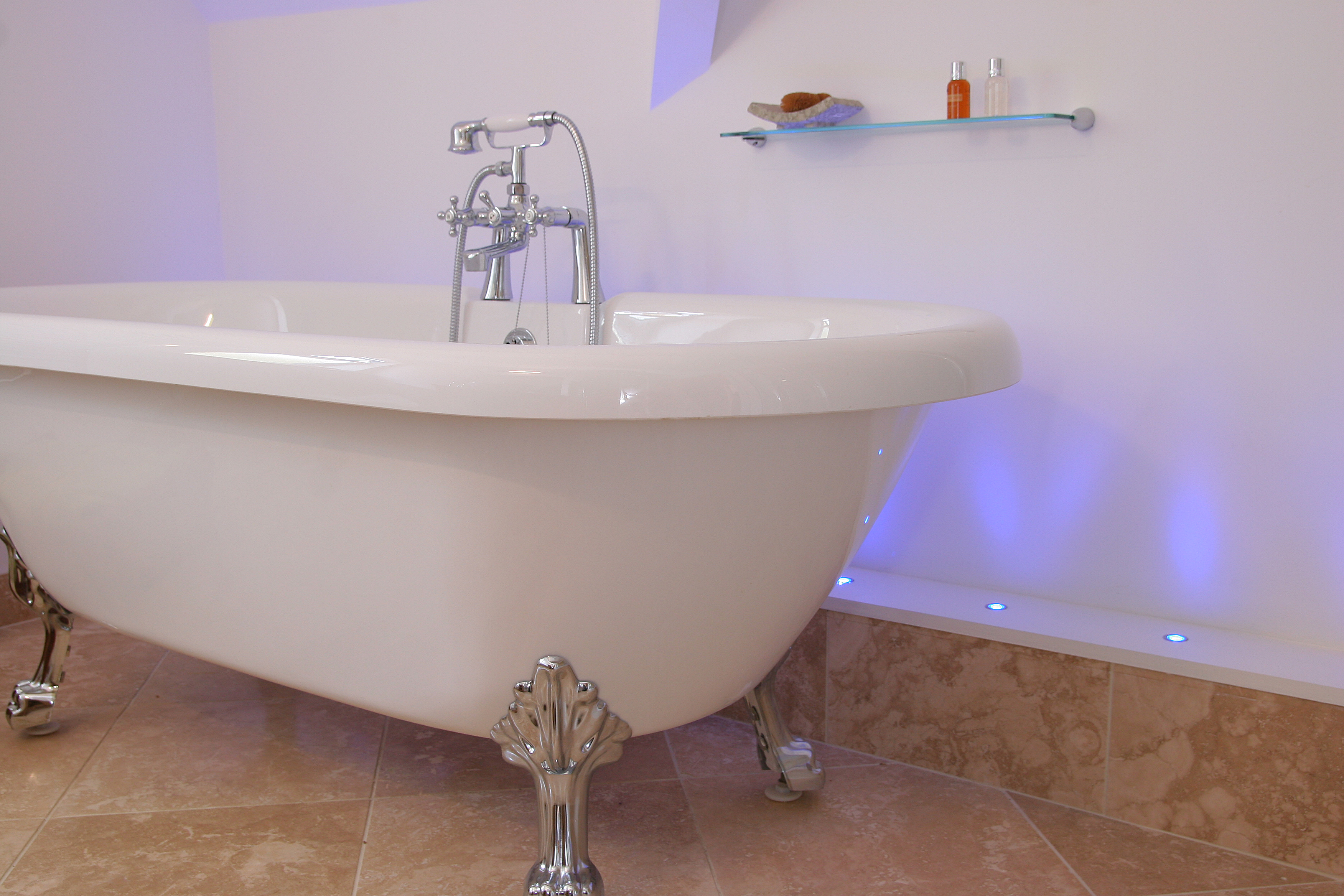 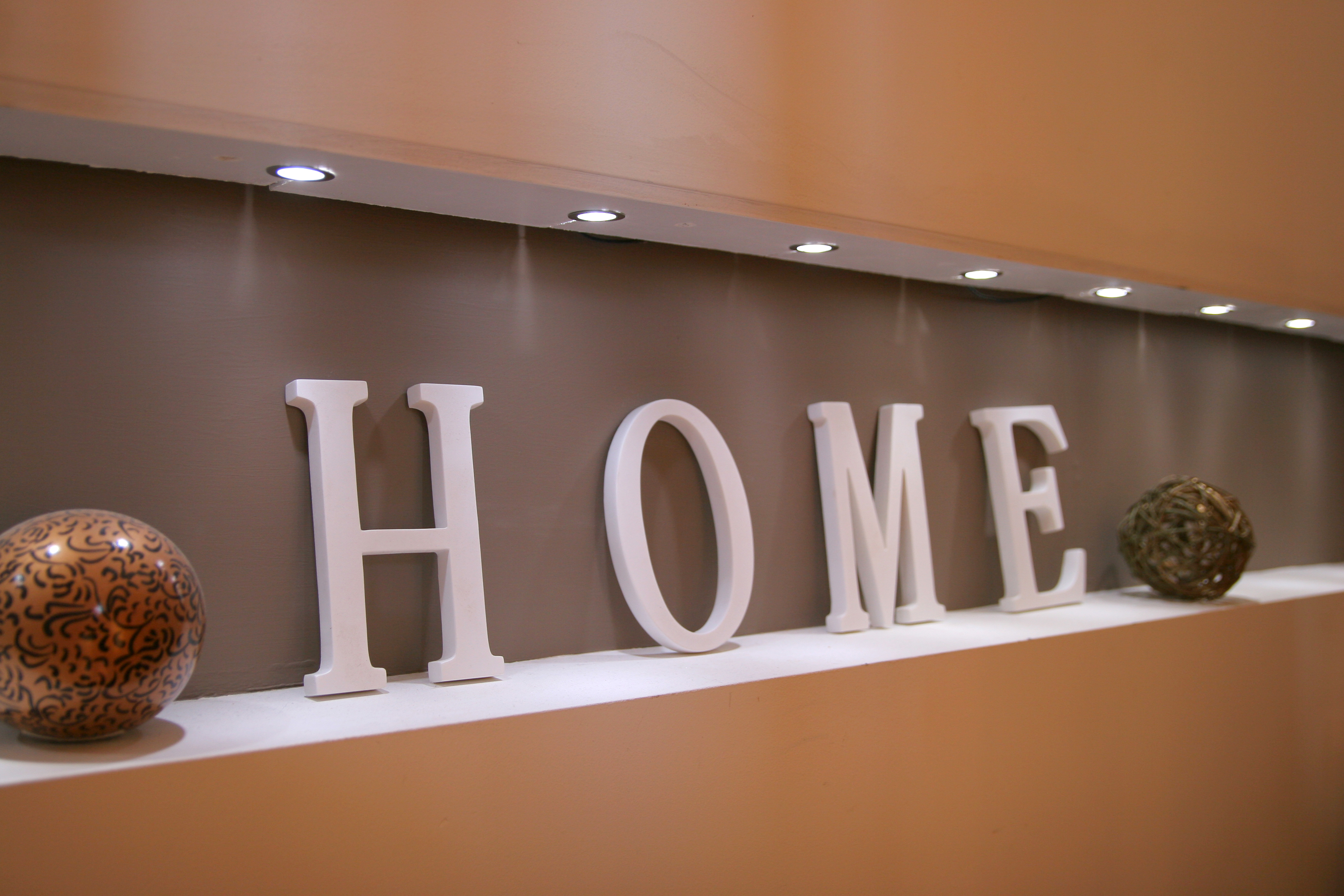 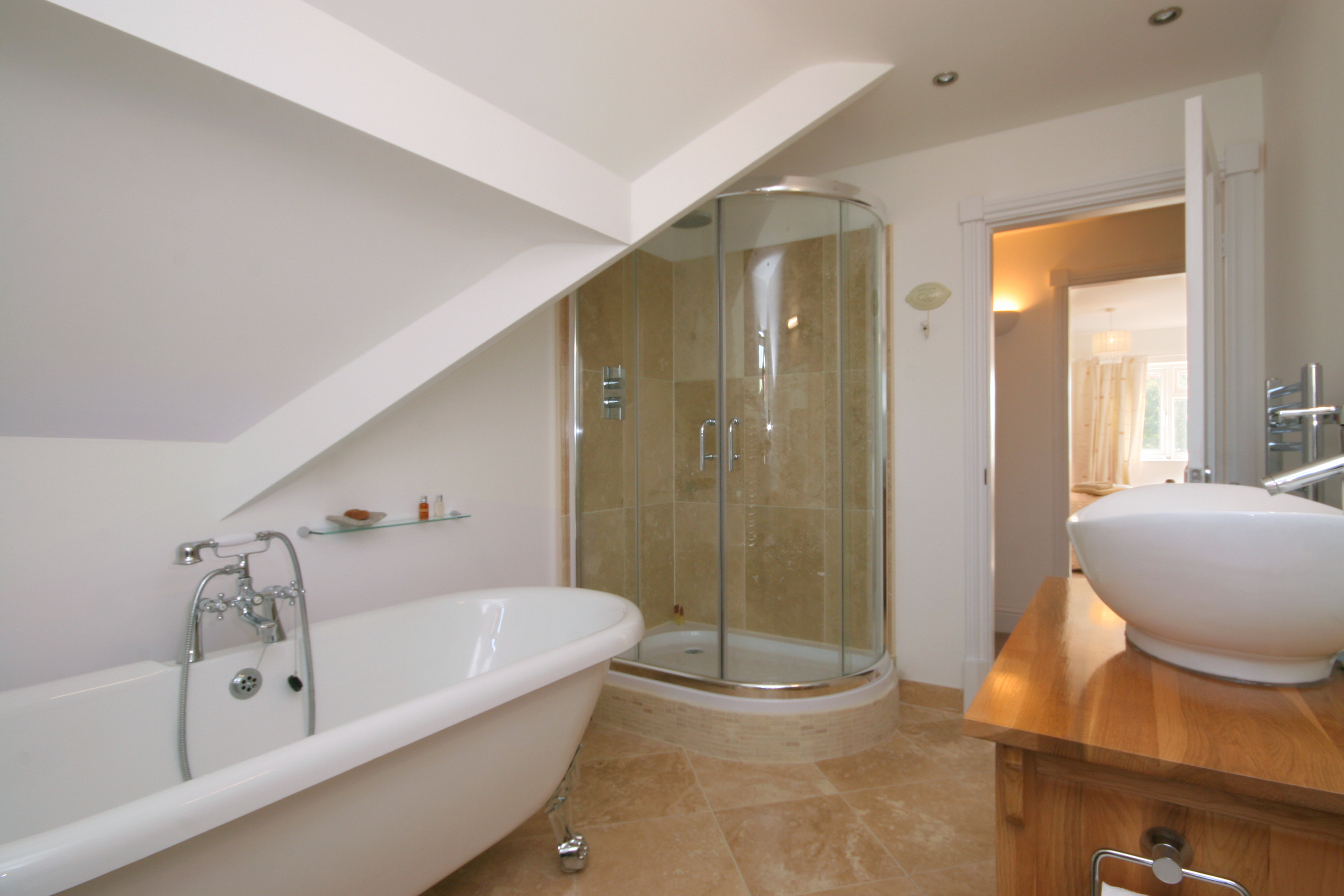 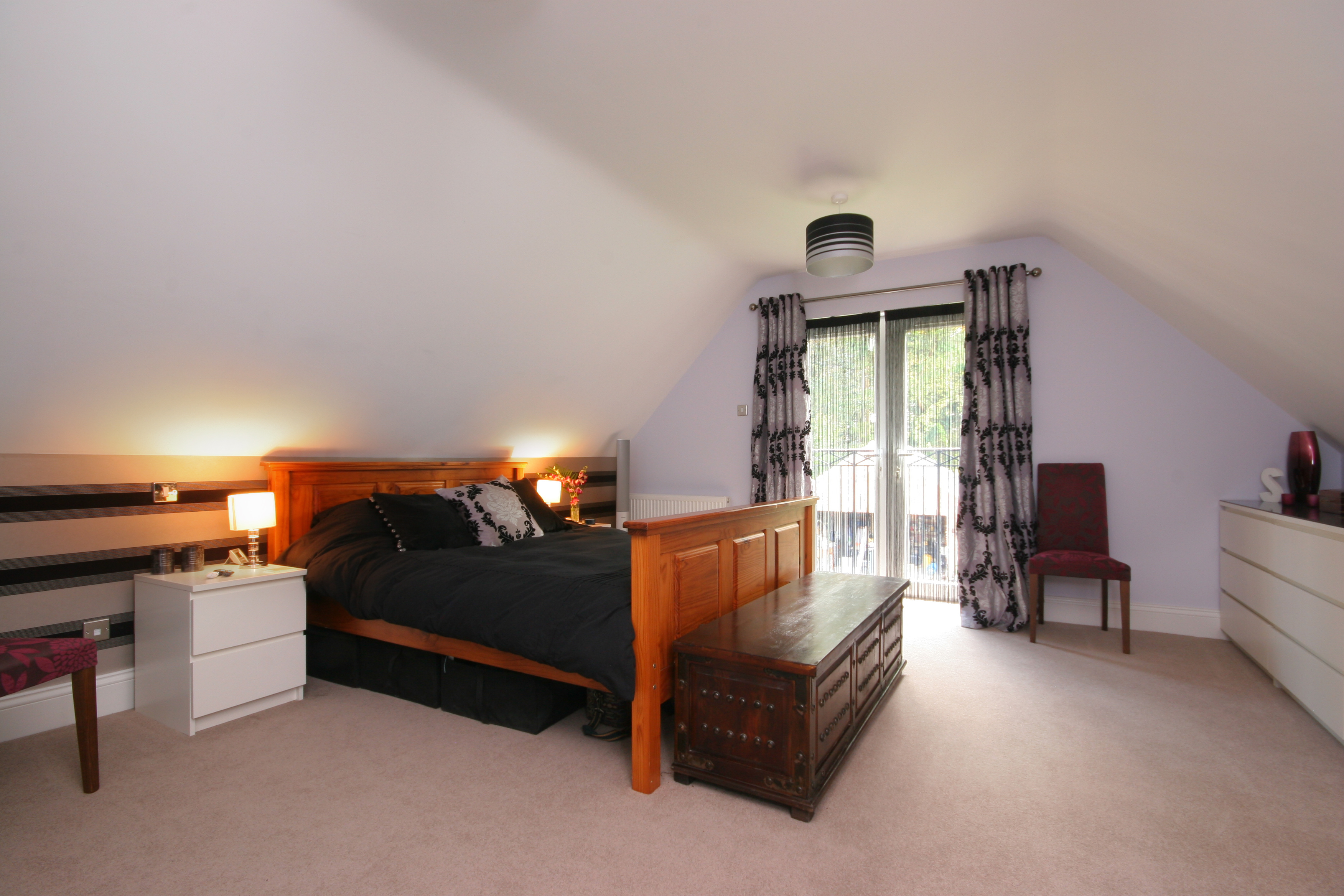 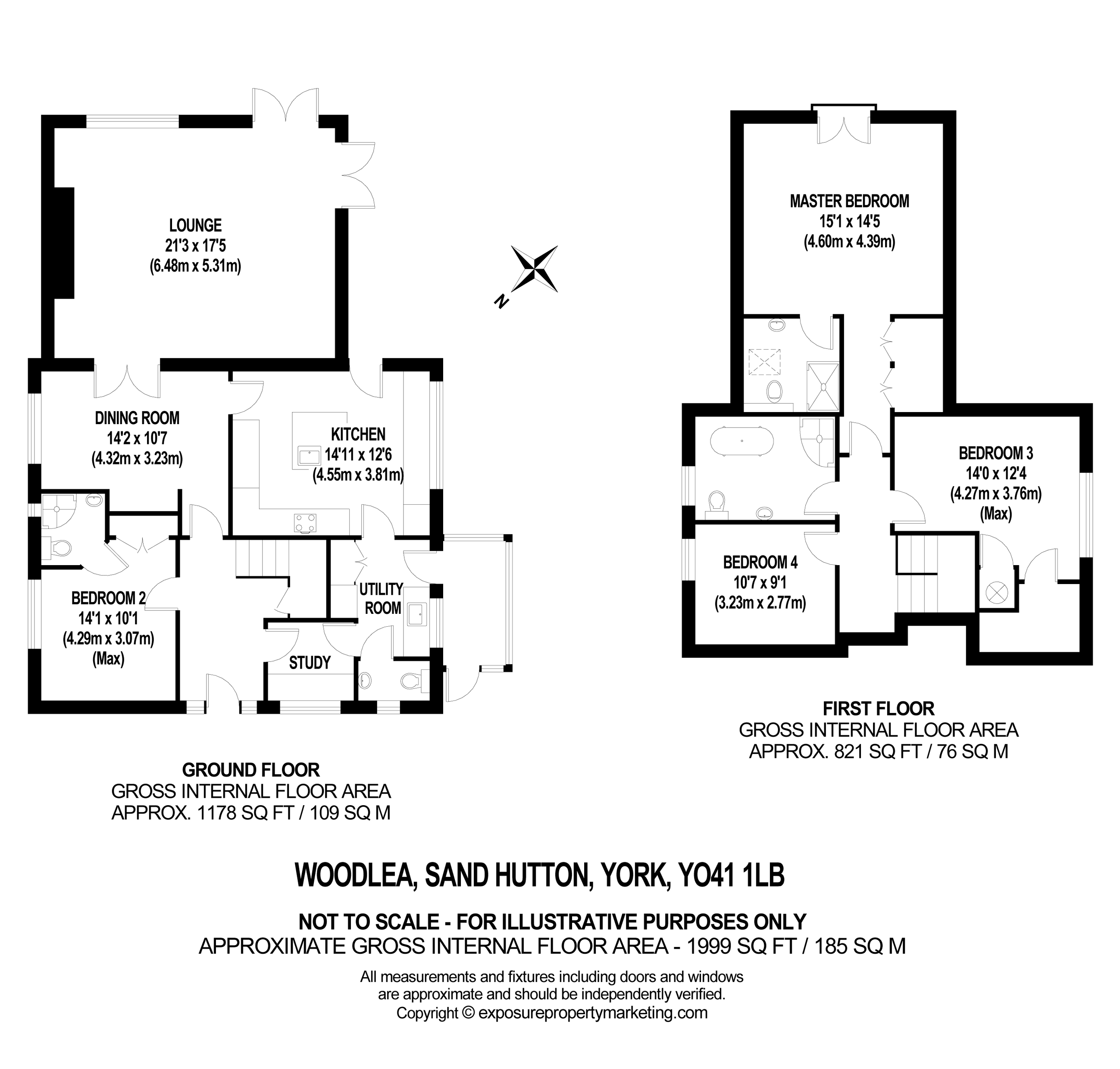 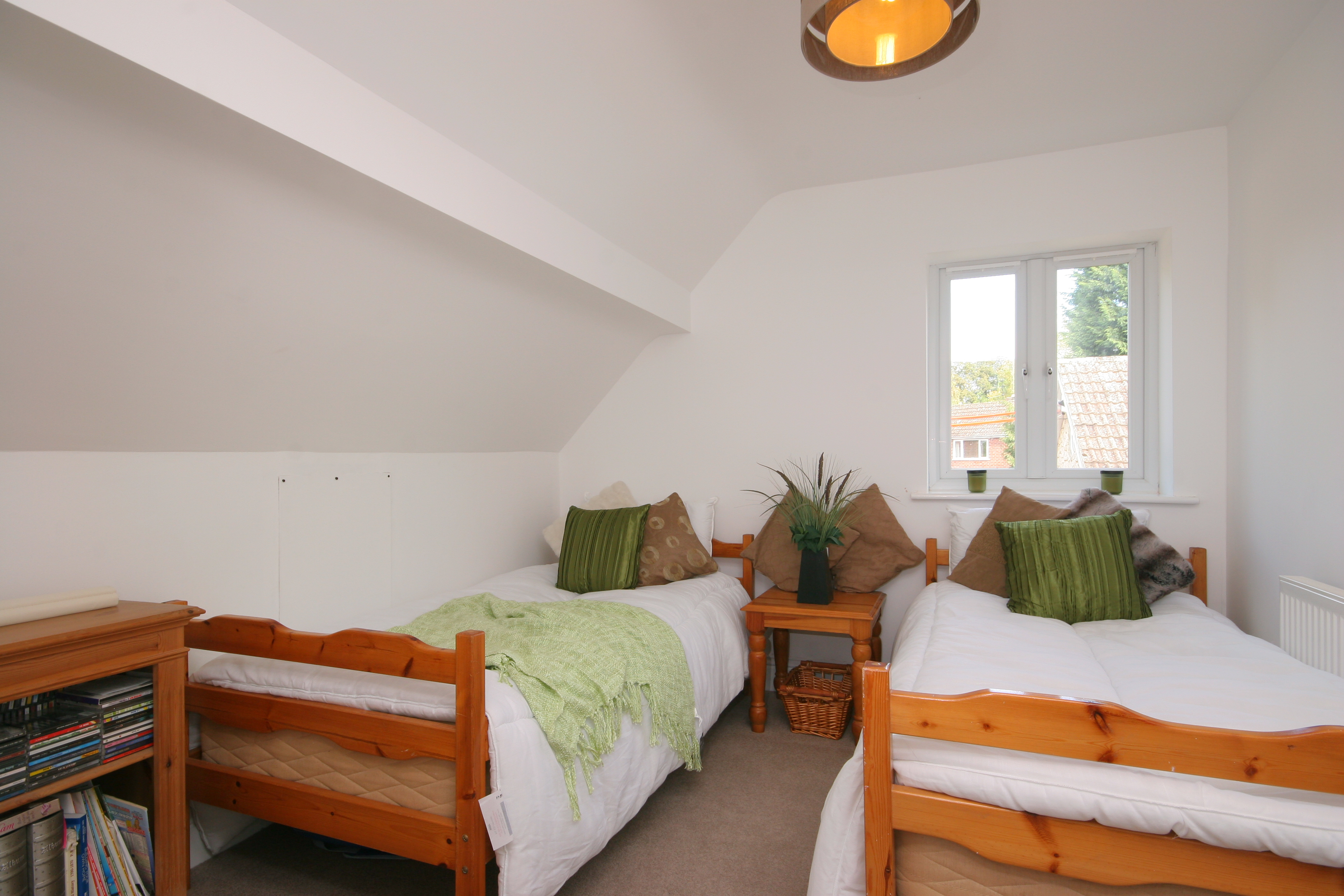 The kitchen became the dining room and a new lounge was created in the extension.

The old coal house was knocked through to create the new spacious entrance hall, an oak front door with mirrored side lights created a contemporary entrance that gave curb appeal and created interest in the design of the interior.  A porch was built over the front door (to the maximum size that did not require planning) and the step was tiled with slate.  A wall was built along the front boundary with box hedging planted into the top, the letter box was also incorporated into one of the pillars. 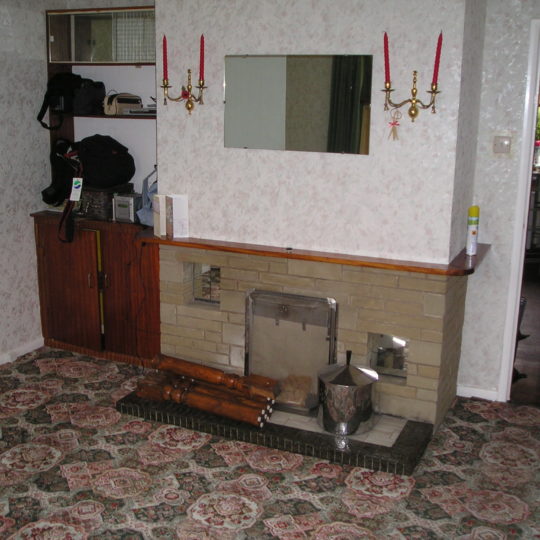 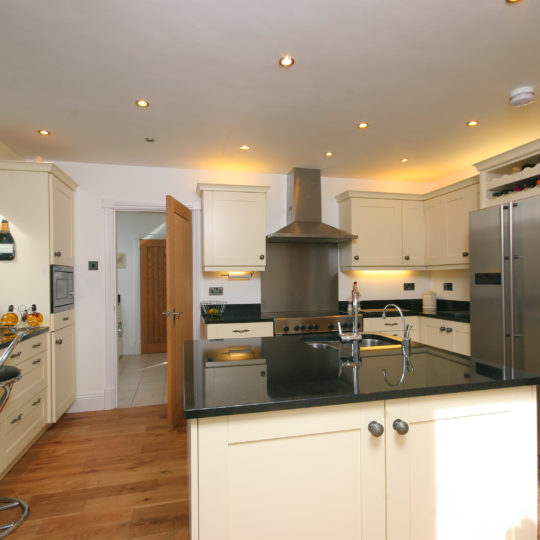 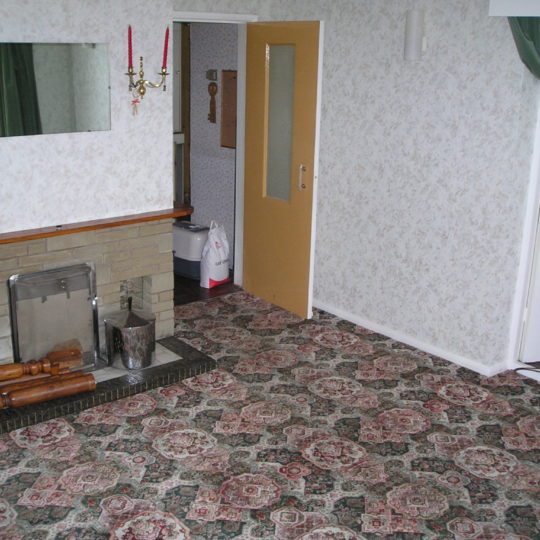 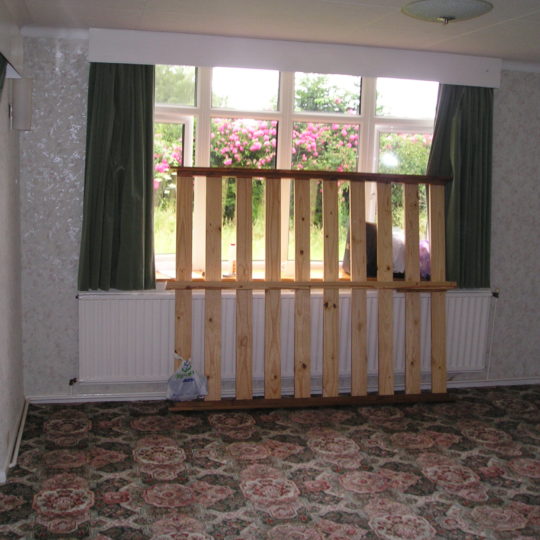 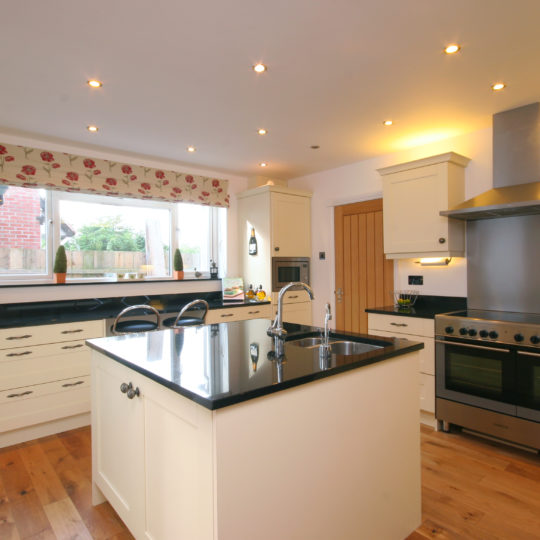 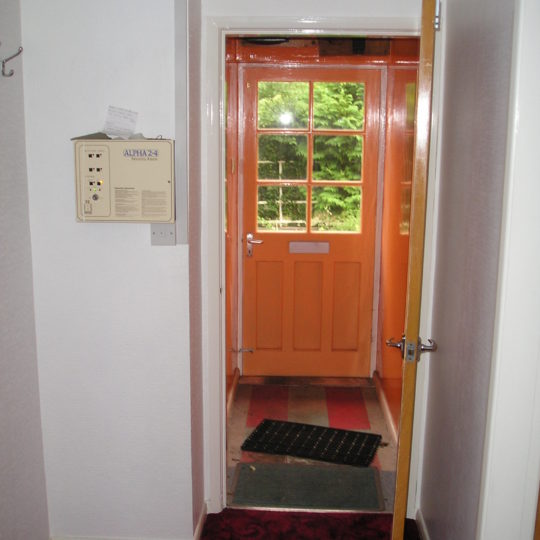 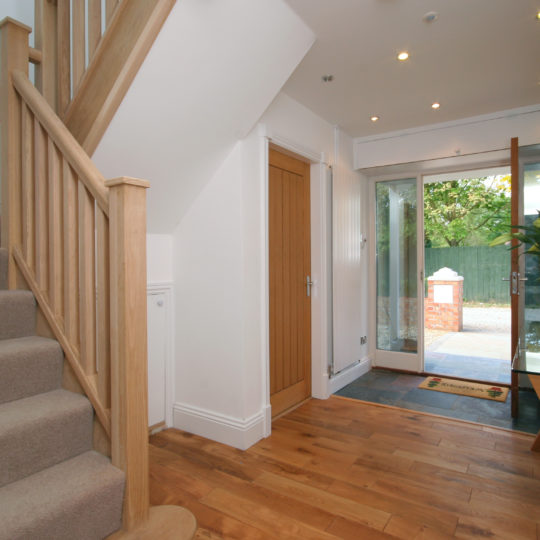 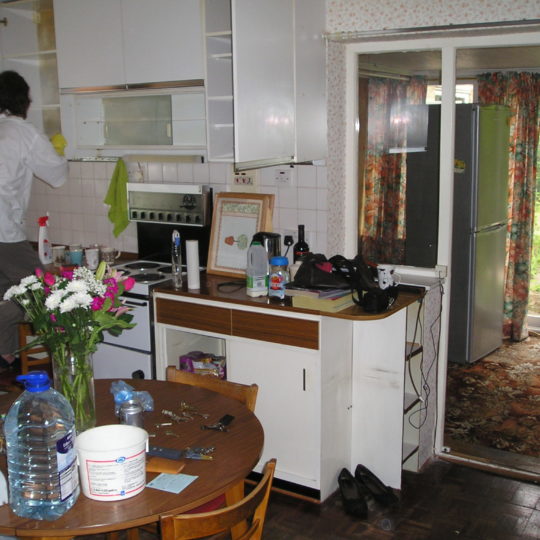 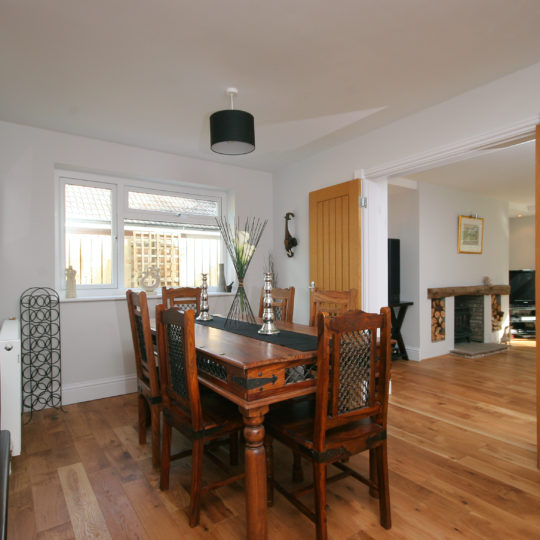